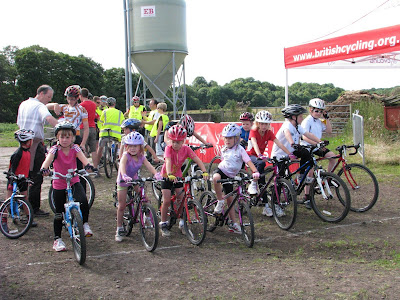 The sun shone for the Tyneside Vagabonds Go-Ride Games Cyclocross race at Thornyford Farm, Kirkley (near Ponteland), and a warm welcome was made to the riders who came to race. Over 30 riders attended and great fun was had by all. Racing got underway at 2.30pm.

To round off a great day of racing it was over to the Adults race where Jo Reed rode a great race in her first Cyclocross race. Jo won the Ladies category. Alex McLean took the win in the mens but it was not an easy one as Adam Hogarth led the race from the start and looked very stong. When McLean passed Hogarth they raced hard for latter half of the race but McLean proved stronger to take the win.